The Isle of Giants is now live, which means there are 5 new pets out there just waiting for a good home. So, I got suited up for a new adventure. 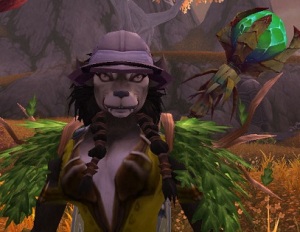 The shoulders are to help me blend in with my surroundings. This is some big game hunting we’re about to do, and we really need the camouflage. You’ll see. I mounted up, fired up some tunes, and headed for parts unknown.

Well, slightly unknown. To get to the Isle of Giants the first time, go to Zouchin Village in Kun-Lai and start flying north. You’ll start to get fatigued, don’t panic. Because you aren’t allowed to use your flying mount on the Isle, once you cross over into its waters, you will be dismounted, but that’s cool, just turn into a whale if you can and keep swimming. Oh, YOU can’t turn into a whale? Well, keep swimming anyway. You’ll make it. Probably.

Once you get there, make sure to pick up your faction’s flight path on either side of the beach that greets you as you swim up: Alliance in the West, Horde in the East. Aw, they’re slant-wise named after one of my favorite dinosaur video games of all time, Bubble Bobble. I wonder why. Hmm.

Oh man wait, there are dinosaurs here! In fact, therAAAAAIIIEEEEEEE!

Besides exploring and getting smashed to bits by enormous dinosaurs, there are 2 things for pet collectors to do. You can kill dinomancers for the adorable pets they drop. There are 4 tiny baby raptors wearing helmets. They will soulbind to you as items, but you can cage them and sell on the AH if you get too many of one type while waiting for the one you don’t have yet to drop. As of now they’re ranging ~300g, but that should drop shortly, as hunters also need to kill the dinomancers for the very rare book that allows them to tame the direhorns on the island.

For me as a moonkin, the dinomancers can be tricky. They have an ability which heals them to full, but they only cast it when they’re above 50% health. It’s a relatively short cast, and if I screw up my interrupt with a minute-long cooldown (seriously, a minute? siiiigh) I basically have to wait that minute. However, once they go down below 50% health, they stop casting. Why?

Let’s just say it’s kind of difficult to cast a heal when you’re a triceratops.

So, why even kill these guys, if it’s difficult and you can buy those silly raptors off the AH anyway? Well, look up 2 screenshots. See that bone? Yes, I said bone. Stop giggling. That bone is currency. You go here, in this cave on the map, to do so.

You can trade in 1 bone for like 2g, 10 for a mote of harmony, or 999 for a spectral porcupette. Once you get all your baby raptors though, I’d consider switching over to killing direhorns, as they drop far more bones per kill and also have a chance to drop an egg. The eggs haven’t been fully datamined yet, but from the anecdotal commentary on wowhead, it seems like they’ll contain mounts and other goodies.

There are many other goodies and places to see on the island. I recommend seeing the boat (with a full group and a tank), as well as just general exploration. Unfortunately there aren’t any pet battles to do on the island, but the ambiance is jus–

Update – The very first thing I got out of my primal egg was a sweetass black raptor mount.