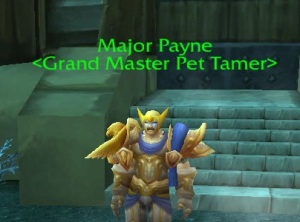 Look at that mustache. What is he, an old-timey strongman hipster?

He was the second fight I had to sort of ‘gear up’ for, and is one of the few for which I don’t yet have a 2-pet powerlevel strategy. However, out of sheer spite, because I hate his STUPID FACE and want as many people as possible to fart in it, here are some strategies I’ve used to beat him.

His 3 pets are the mechanical Beakmaster, beast Grizzle, and elemental Bloom. The elemental is always last in his lineup, but whether Grizzle or Beakmaster goes first can vary. There are two ways you can go about beating him. The first is to pick pets which defend against his pet’s attacks, like this: 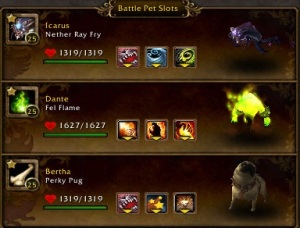 Flying defends against beastly Grizzle, elemental defends against mechanical Beakmaster, and critter defends against elemental Bloom. In my experience this is a slightly less reliable setup. In particular, my Nether Ray Icarus has trouble burning down Grizzle quickly enough. Grizzle deals a lot of damage, and also has a really big multi-round heal ability so he can be very difficult to counter. Fel Flame Dante really shines as a glass cannon here, and can pick up some slack. Between her heal and burrow ability to counter Bloom’s multi-round abilities, Perky Pug Bertha had no trouble holding her own.

There are 2 real issues with this strat. Against his pet lineup you need to burn down his pets very quickly, and picking based on defense doesn’t really help that cause. The other is that abilities within pet families can vary pretty widely. This strat gets a lot less doable if you replace the Fel Flame with an elemental with off-class abilities, like the Ashstone Core, for instance.

The other strategy is one I call the glass cannon: Pick pets which have abilities that are strong against beast, mechanical and elemental. 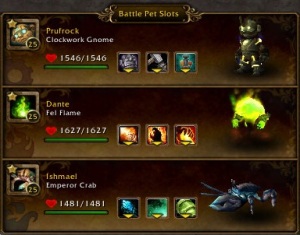 The point of this strategy is to kill them before they kill you. My Clockwork Gnome typically kills Grizzle before he’s any trouble, and then it’s smooth sailing through the rest. A Fluxfire Feline might be a better pick here, because of their burst DPS, but I haven’t found a mechanical upgrade stone or a rare yet so I can’t personally vouch for that. You’ll notice that Dante shows up again to pummel Beakmaster… he is particularly suited for this battle. A Phoenix Hatchling or Dark Phoenix Hatchling are also good choices. My beloved little crab is very hearty, so he’s usually my pick when I need to deal aquatic damage.

A combination of these strategies would have first up against Grizzle a pet in the Flying family with mechanical abilities. I haven’t found any of these thus far. As implied above, the elemental family is both a strong attacker and defender against mechanical pets, so many elemental pets are excellent choices. For Bloom, a critter with some Aquatic abilities would be a good alternative. Namely, a snail or the Rapana Whelk. The dive ability is a good counter to Bloom’s roots too.

Good luck, and please make this jerk eat dirt. For me. 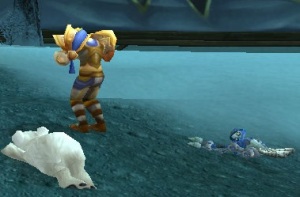