This incorporeal little guy has been breaking hearts since battle pets came to be. 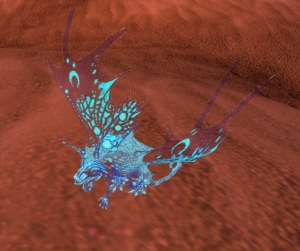 Nether Faerie Dragons are Dragonkin battle pets which like to hang out around Dire Maul in Feralas. They can be tamed in the open air area in the world, and are not present in the Dire Maul instance. They share a moveset with the very colorful Sprite Darters, also found in Feralas, but the Sprite Darters are drops. The two share a very similar skin as well, but Nether Faerie Dragons are transparent, which can make them just a bit difficult to screenshot, thank you very much.

Much of a Nether Faerie Dragon’s utility is wrapped up in Life Exchange, which is a fun, quirky ability to use. It equalizes the health between your Faerie Dragon and its target. Initially it completely steamrolled the Beasts of Fable. If your Nether Faerie Dragon starts off at 1384 health and Dos-Ryga starts off with 1942, if your Dragon acts first, it would hit Dos for 279 (the difference of the two numbers, 558, halved, to bring both pets to equal health). But in the earlier iteration of the Beasts of Fable, where Dos-Ryga’s health pool was over 3K, with no damage cap on Life Exchange, it was truly devastating. 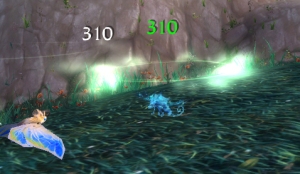 Now, it’s not quite so key, because of a series of nerfs. That’s alright though, because initially, my strategy for the Beasts was pretty much just frontload a couple dragons, and now it takes a bit more strategy, which pretty much always means more fun. And still, to use Life Exchange properly involves a good bit of timing and luck, because otherwise you could heal your opponent, or get killed before you can pull it off.

Beyond that, the Nether Faerie Dragon has a handful of Flying abilities (Slicing Wind and Cyclone) and a handful of Magic abilities (Arcane Blast and Moonfire), which, along with the Dragonkin family defense against Magic, makes it a really good choice to counter Flying battle pets. Sharing a slot with Life Exchange is Evanescence, a move ability similar to a rabbit’s Dodge. It can be more useful than Life Exchange, depending on your opponent, but it’s less unique.

Also, I’m kind of afraid if I make this poor thing fade away more than it already has, it may just up & disappear altogether.

The Saint Patrick’s Day holiday, not celebrated in WoW, has always been one of my favorites. Mostly for obvious reasons. I figured it would be fun to profile one of my favorite pets as well, even though I’m kind of breaking one of my own rules by doing so.

The Emerald Whelpling is a pricey pet, with a rough average around 7000g. If you’re particularly enterprising, you can farm one up yourself. Their spawn point has moved from the Swamp of Sorrows to Feralas, from the corrupted whelplings near the portal to the Emerald Dream, but the drop rate continues to be vanishingly small.

This particular profile is mostly for seasonal flavor and sentimentality, but the Emerald Whelpling’s battling prowess can’t be denied either.

Though it doesn’t do too much in PVP, in PVE it’s a workhorse with 2 strong heals (Emerald Dream and Tranquility) to choose between, a couple of magic moves, one of which is the synergistic weather effect Moonfire and the other the straightforward Emerald Bite. She also has a Dragonkin nuke with Breath. Her moveset is rounded out with the utility shield Emerald Presence.

In a lot of situations, a far less expensive but still somewhat rare Emerald Proto-Whelp can fill a similar role. Especially in PVE the two are fairly similar. The big difference is that the Emerald Whelpling’s moveset can be swapped, so she can turn from a defensive tank with Emerald Presence into a damage-dealing phenom with Moonfire and Emerald Bite. There are many other Dragonkin battle pets available to fill the damaging role too, like the Nether Faerie Dragon which is tamed in Feralas, it’s just somewhat rare for a pet to be able to fill both roles all on its own.

As you collect more & more battle pets, at specific benchmarks, you’ll get an achievement and a new pet. The first one is the Reeking Pet Carrier at 50 unique pets. This counts, for example, a brown snake and a black snake as 2 different pets even though they’re not exactly special little snowflakes. Who are you trying to fool, snakes? Up until 150 pets and the Littlest Pet Shop achievement, they’re all pretty much duplicates of other pets you can tame or purchase. With that milestone, the Celestial Dragon awarded has both a model vastly unique from any other battle pet in the game and a few unique moves as well.

The unique move is, well. Starfall is similar in nature to Moon Moon’s moon tears, and packs a lot of really cool graphic punch (see above), but as both offense and heal, it just isn’t all that effective, even on 2nd go-around after it’s buffed by its own Moonlight effect. It’s also on a fairly long timer, making it kind of a poor choice unless you’re just grinding wild battles and want to see some stars.

She’s been the recipient of a few nerfs over time. She used to have the much stronger Dragonkin ability Breath instead of the current Elemental Burn in the first slot. Combining this with a strong heal in Ancient Blessing made even stronger with Moonlight in the third slot made for one of my go-to battling grinders. The overall effect was close to a current Spawn of Onyxia with more staying power. But now, she’s not really a first choice. Rounding out her moveset is the offense dampener Roar (though for me this is a poor choice because it deals little damage and that first slot is most of her offense) and the completely bafflingly placed Arcane Storm, which isn’t really a popular choice to begin with.

By now, most WoW players are aware that our favorite scapegoat Greg Street has moved on to Riot Games. As a result, many players were in a tailspin for a while there. Who is going to be at fault for every little aspect of the game that goes awry? Enter Celestalon.

Celestalon’s official title is Technical Games Designer. Though Celestalon’s level of snark isn’t quite what Mr. Street once used, a hashtag (#blamecelestalon) has been circulating, used in the vein of #thanksobama, to blame Celestalon for things that couldn’t possibly have been his fault. So, I’d encourage those of you battlers to #blamecelestalon for the nerf to the Fluxfire Feline, just to make him feel at home.

Or um, because this is supposed to be trying to butter up devs for upcoming information, that’s probably not such a hot idea. Maybe you should just #leavecelestalonalone? I’m kind of bad at this.