This is another post which is really more for me than for you. While my specific goals are obviously going to be unique to me, I’m sharing this because some will be fairly universal for a lot of battlers. And I’m posting it now because I’m not sure how long we have until Warlords, and I figure the sooner I start to prepare, the longer I have to procrastinate. 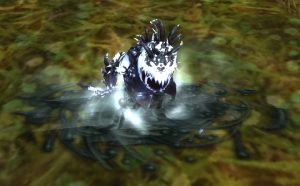 1. Get all the battle pets from LFR and Normal/Heroic raids from this expansion. The LFR ones in particular, namely the Gooey Sha-ling and Living Fluid are going to be next to impossible to snag after we move on from Mists of Pandaria. However, because of the incoming item/stat squish, it’s really hard to gauge how quickly people will be able to solo old content. I fully expect the price on, eg the Living Sandling to soar when the Dark Portal opens red, but drop when people can begin soloing Throne of Thunder. However, the price on that Gooey Sha-ling is only going to go further and further up.

2. Get all the battle pets from Timeless Isle that require spawn timers. I finally got Garnia to drop the Ruby Droplet battle pet (in a b/b breed, whomp whomp) but I still have many to collect. For now, depending on your server population, there is always a fistful of people on the Isle with some kind of rare timer, sharing their information (the addon pictured is Rare Coordinator). Once Warlords drops, those people are going to evaporate like Morning Glory Dew in Tanaris, and their shared information with them. This likely also means their AH price is going to skyrocket a bit as well. Excepted here are pets dropped from alt-spawn mobs, like the Spineclaw Crab from the Monsterous Spineclaw. Even with the stat squish those are probably going to be just as easy if not easier to churn come Warlords, though I will be trying to grind these as well in the meantime (just not quite so targeted).

3. Keep leveling! Those new raid and Timeless Isle pets are going to need to run through a lot of pet battles before they’re at cap. This is kind of low-priority though, as the level cap remains at 25 through Warlords (source). This is also a for-now goal, simply because I get the feeling this may change after beta opens and we discover the nature of Garrisons, and especially breeding… whether we need many high-level pets, many low-level pets, what the quality needs to be, etc.

4. Stones, stones, stones. I still have a lot of pets to upgrade, but more importantly I have a feeling they’re going to pull some Minfernal-styles spawning shenanigans again for this expansion. This is fine, but I’m saving a few of each stone type and a couple universals as well, just in case. I’m also continuing to do the Celestial Tournament and stocking up on tokens (so I can use them on whatever), and especially the pet XP biscuits from the Beasts of Fable daily and PVP weekly.

5. Clean out banks; organize central meta-bank alt. Those stones and biscuits and bandages and tokens need a place to go. With all this pet stuff (and all those random Timeless Isle armor drops from failed pet RNG) I really need to get on having them all in one location. Altoholic helped me track things down as a stop-gap, but now that Bind on Account means you can mail things cross-server and cross-faction I can have one meta-banker for all this garbage. 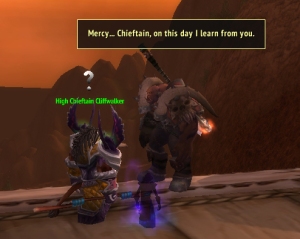 6. Finish up on the alts. One thing I found extremely beneficial to battling in Mists was having a character at cap on both factions. It happens oddly frequently that there’s something only attainable on one side or the other (eg, having 2 different pets from Enchanting during Cataclysm). From the map alone it seems like there are going to be some zones which are more easily accessible to one side or the other. While I’ve been largely bifactional this expansion, my Horde toon is on a PVP server, and I’m really over open-world PVP. The rumor is that they’re not turning on flying in Draenor until 6.1, or at least for a while after launch, so I can tell already I’m going to want my level 40 undead at cap, pronto. This also includes trade skills, as it seems like a roll of the dice which profession is getting a crafted pet this time around (probably engineering). And of course, everybody needs to have fishing, because carps.

The Pandaren Spirit Tamers were first added to World of Warcraft as a new challenge for pet battlers in patch 5.1. Each lives in a far-flung part of Pandaria. Each is a representation of an element, and each has its own separate guide, featuring a video.

Whispering Pandaren Spirit Tamer – This tamer is high above the clouds and uses a lot of native Flying battle pets.

Thundering Pandaren Spirit Tamer – Near the seat of the Mogu, this tamer uses earth and magic to great effect.