I admittedly have a soft spot for these guys. Dinosaurs gotta stick together, amirite?

There’s a very special thing about these dinosaurs in particular that makes them heartwarming. It has nothing to do with how they fight. It’s how they spawn: almost literally.

The Elder Diemetradon mobs in the area have a chance to spawn as a ‘mother’ diemetradon. This won’t change the mob itself in any way, but after a couple minutes, it will spawn a baby diemetradon hatchling! 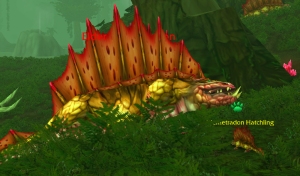 If you fight that diemetradon hatchling and kill it, the mommy will make a new baby diemetradon in a few minutes which is actually really screwed up if you think about it. Once the elder diemetradon mobs are spawned they won’t spontaneously become mommies, so if you’re hunting hatchlings you’ll have to put them down, preferably via a moonfire to the face.

To farm these guys for a rare, I set raid markers on the diemetradons I knew were mommies. After around 10 minutes of circling to make sure I’d marked all the momma dinos, the carnage began. Eventually, enough non-momma diemetradon respawned as moms for me to farm up a rare, hooray!

A few other animals share this unique, adorable pattern. Cheetah Cubs and Infested Bear Cubs do, and I’ve heard Tiny Twisters do too, though I haven’t tried this out myself. Flayer Younglings do too, though that’s even more disturbing as they’re humanoid type pets.

Maybe today you should give your own mother a call. She worries, you know.