First of all, pet PVP isn’t that bad. I’m not sure why I was hesitant to get into it from a ‘I’m gonna lose so muchhh’ perspective. Even though, let’s be real, I started off losing pretty frequently. Now I’ve leveled off to winning roughly 4 out of 5.

The issue now is that there isn’t a ton of reward for it. Yeah, cute little direhorn. And right now I’m getting exactly 1K XP per battle I win at level 17, so that’s additional incentive. But other than watching my win totals go up (which right now that’s bugged and I’m not properly being awarded achievements or wins for my weekly quest, so that may have something to do with my disenchantment here), and that weekly quest, there isn’t any way to progress. I keep getting these cruddy green upgrade stones and that’s about it. Because of how long the battles take, dozens and dozens of turns, that 1K XP is just barely beating out grinding lowbie squirrels. Throw a loss or two into the mix, a longer queue time, and it completely tanks my XP per hour.

If this is your first time PVPing, I’d encourage you to just keep at it. I know I still have a lot to learn. I mean, if you’re raiding you don’t say “well, Kel’Thuzad did this thing I haven’t seen up to this point, I guess I should just give up.” Same goes for lil KT. Don’t give up! Pretty much the whole time I’m doing pvp, I like to keep this song in mind (no really).

If your team combo doesn’t seem to be working, try a new one. My composition right now is my Wild Golden Hatchling with Call Lightning and Cyclone, my Clockwork Gnome with his turret, and my Scourged Whelpling with Plagued Blood. 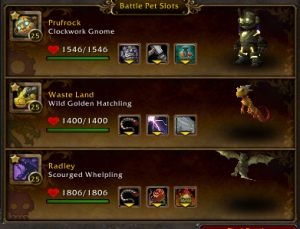 I make a lot of swaps, and if I come up against another heavy DoT team or a team with a pet that has a shell shield ability I could be in trouble. But for now, it’s working out pretty well for me. PVP has a steep learning curve, because you need to know your pets’ abilities to the utmost, but you also need to learn everyone else’s pets’ abilities, frequently on the fly. I’m pretty sure part of the reason I’m having success here is because the Wild Golden Hatchling isn’t common for pvp, so people aren’t too familiar with what it can do.

I feel sad for some of the people I’ve been fighting, too. That isn’t meant to be a brag or elitist comment. I’ve beaten people with green quality pets, clearly just standing on their wobbly pet battle legs for the first time like baby fawns. It makes me almost wish I could find these people afterward, to tell them they’re just not going to win with a team made up of an un-upgraded Wolvar Pup, a snake and a breed 13 rabbit. And of course, there are also the maddening tri-teams of triple speed rabbits, or triple Kun-Lai Runts, all named in such a way that make it obvious the player is just there to troll for lulz, so clearly being able to contact opponents isn’t a good idea in general. I just want to give some of those poor little tamers a hug and tell them to not give up. 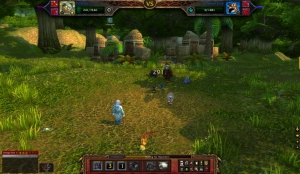 But those are both few & far between, and it’s mostly the close wins, or even if I lose by a huge bit, learning a new pet, that makes it fun. I’ll definitely continue to do this for the leveling challenge, because it makes it a lot more tolerable to alternate grinding & pvp. Were it not for this silly leveling challenge I’d get my 10 wins on the week and go do PVE until next week. I’m not asking for a currency-like mechanic like player PVP, though that’s how PVP avoids the same feeling of character stagnation. I’m not sure how you’d fix it, honestly. But, it’s so time-consuming I need a carrot other than ‘fun’. 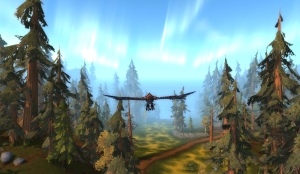 Speaking of carrots and wasting time, no I haven’t gotten a Val’kyr yet. I tried for about an hour in Grizzly Hills, then went to go poke around in Zul’Drak for a minute. When I came back, it was obvious that I was no longer in the same CRZed Grizzly Hills as before. With the small number of spawn points, until we know more about how taming changes the spawn I can’t see devoting more time to this in the short term.

I’m 1/10 for Raiding With Leashes 2 pets (got the waveling). Later today I plan to farm some bones and maybe a baby direhorn, plus LFR for maybe pets. 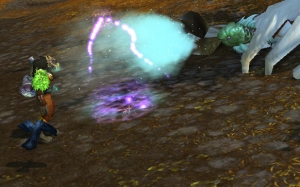 The Beasts of Fable are a lot harder, which is fun, and no I’m not being sarcastic for once. I felt since 5.2 that they were too easy to be the ‘epic challenge’ they were presented to be. As epic as flying around for an hour is, lol no. Apocalypse still functions properly, and Life Exchange does the correct amount of damage, though overall this is less damage, because the Beasts Of Fable’s life pool is relatively smaller. However, the Beasts hit much, much harder, and roaches and faerie dragons seem to be made out of wet paper, so using both is a no-go now. I’ve been using the Roach, plus 2 others based on the pet’s family type (eg, for Gorespine I used my Pandaren Dragonling and Darkmoon Zeppelin). For the pets that heal, I’ve been using my Gilnean Raven equipped with Darkness, though there are better choices. You have to have something to cut that healing though, because otherwise it’s just silly. 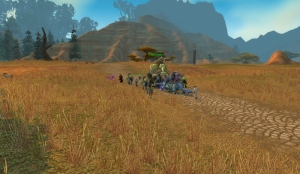 As to the Barrens stuff and story, I was really hoping that Alliance would get the kickass, “no sleep til Orgrimmar!” moment. I’d actually avoided the spoilers about it, because as soon as I read that line, I knew we were in for something really epic. Instead I got to tool around in a mechanical cat. I haven’t done anything in the Barrens since handing in my initial 15 resources, even though Gahz’rooki is on the line, because I’m really annoyed with this. I know that at this point this is the Horde’s story, but this feels slapped together. 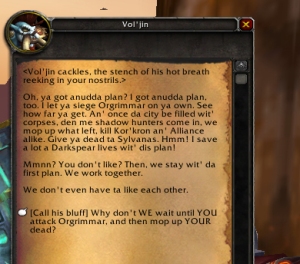 And just a tiny bit insulting.