Now that we have a handful of pets at level 3 or 4 in this 101 series, it’s time for our very first tamer battle! We’ll use the one in Elwynn Forest, but the one in Durotar is very similar.

When you get your first pet to level 3, you’ll get a popup quest from either Varzok or Ms. Burnhep to come talk to them in Orgrimmar or Stormwind respectively. They’ll then send you along to your first tamer battle. You can also find the tamers by looking at your big map for the green pawprints. 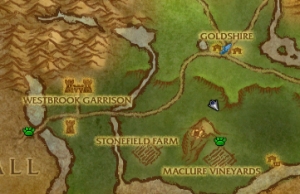 You won’t be able to do the quests as dailies until you complete all of them on a continent the first time around. Tamer battles generally yield much better XP, both for your pets and your character, than wild battles do. Certain ones will give you a bag full of pet-related goodies as well.

To be absolutely clear, this is largely a hypothetical to learn team building. I fully expect anyone who comes across their very first tamer battle to dominate it fairly handily. Or if not, level a bit more and then stomp all over it like you’re level 90 and visiting Wailing Caverns for a tea party. You do not need a tailored strategy for this fight, and really won’t until you’re fairly deep into Outlands or Northrend. The process for building your team will be the same.

For this exercise, we’ll go with the very first Alliance tamer, but the first Horde tamer has a somewhat similar setup. Julia Stevens’ pets are both snakes.

I can tell this immediately, because most tamers have their battle pets displayed helpfully alongside them while they’re out in the world, so you can get an idea before you even engage them what you should do. For tamer battles, you can enter the battle and forfeit to get a better handle on the abilities you’ll be facing, too. Usually if you flee a wild battle your pets take a 10% HP hit so that should be avoided, but you don’t take that same hit with tamer battles.

In this case, we can see immediately that her snakes are both Beasts, both level 2. We can see that the first has poison, which is a fairly deadly damage over time spell, so we need to find a pet with an ability to counter a damage over time ability. This is where we make our first choice. We can either choose a defensive ability to block their attacks, or an ability with reflexive damage to turn their attacks into our attacks. The former is generally a more reliable strategy and more control over the fight, but will frequently make your battle last much longer. The latter will mow down the opposition in a couple turns, but also leaves us more vulnerable.

At this point in the minigame, erring on the side of reliability is a good thing. You won’t be gathering up bandages for some time, so going to heal if you screw up can be a real hassle. After a while and a bit of bandage accumulation, you’ll likely turn more toward blitz strategies to save time.

The tools for PVE and PVP team building are largely identical. Wowhead is still the best resource for analyzing pet abilities. In this case, we’re going to look at Damage Reduction abilities. The abilities here will reduce each hit taken by a flat number. This is really excellent to counter damage over time abilities, but not so hot to counter big hit abilities.

Of that list, the one that leaps out at me immediately is Spiked Skin, which is where we kind of run into a bit of an issue. Looking down the list, nearly every one of those pets are very rare, caught above level 20, or are only learned after a pet reaches level 15, making this kind of an exercise in futility for our level 2 scenario.

By contrast Stoneskin is learned by the popular Feline Familiar at a very low level. One pet worth talking about here is the Anubisath Idol. The reason we’re not going to use him is because, although Sandstorm will shield us from poison, it also means that we’re not going to do a ton of damage on each hit ourselves. Also, the first attack the Idol learns hits weakly against Beasts, making this an all-around poor pick for this particular fight. But here, we’ll look at Shell Shield, learned by many battle pets at a very low level, including a few pets that are very easy to get, like Speedy, which I just happen to have at level 2.

By now we’ll have at least 2 pet battle slots, so we’ll go through the same decision-making process for the second pet. Because the second snake doesn’t have that poison to watch out for, in the second slot, I’m going to go for offensive firepower. The best way to start with that is to look at your opponent’s family’s weaknesses & defenses.

We can find this out either by going to our pet journal and looking at a Beast’s tooltip as seen above, or one of many handy infographics out there on the web. Another option is using another filter on WoWhead. I generally prefer the pet journal, because honestly those infographics usually read like stereo instructions to me, and my pet journal is like, right there. Over time, family interactions become second nature. Since both our opponents here are Beasts, we can see that Mechanical abilities hit them more strongly, but they defend against Humanoid attacks. I specify attacks, because some pets have cross-family abilities. The first snake is an example of this, as his poison does Elemental damage. A UI addon like Pet Journal Enhanced will help find these cross-family pets.

A mechanical is going to be a really good bet against these snakes. Looking through my own personal pets list, I see that I have a Clockwork Rocket Bot at level 3, which is an excellent fighter, and has its own mechanical damage over time to boot. I’ll put him in my second slot.

The big difference between building a pet battle team for PVE and the previous post describing my process for building a team for PVP is that in PVP you need to focus on your own team and how it works together cohesively. For PVE most of building your team is based around countering the moves of your opponent in nearly any mishmash of 2-3 pets.