The Saint Patrick’s Day holiday, not celebrated in WoW, has always been one of my favorites. Mostly for obvious reasons. I figured it would be fun to profile one of my favorite pets as well, even though I’m kind of breaking one of my own rules by doing so. 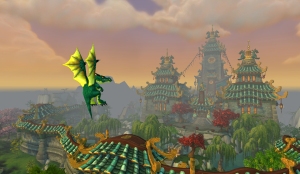 The Emerald Whelpling is a pricey pet, with a rough average around 7000g. If you’re particularly enterprising, you can farm one up yourself. Their spawn point has moved from the Swamp of Sorrows to Feralas, from the corrupted whelplings near the portal to the Emerald Dream, but the drop rate continues to be vanishingly small.

This particular profile is mostly for seasonal flavor and sentimentality, but the Emerald Whelpling’s battling prowess can’t be denied either.

Though it doesn’t do too much in PVP, in PVE it’s a workhorse with 2 strong heals (Emerald Dream and Tranquility) to choose between, a couple of magic moves, one of which is the synergistic weather effect Moonfire and the other the straightforward Emerald Bite. She also has a Dragonkin nuke with Breath. Her moveset is rounded out with the utility shield Emerald Presence.

In a lot of situations, a far less expensive but still somewhat rare Emerald Proto-Whelp can fill a similar role. Especially in PVE the two are fairly similar. The big difference is that the Emerald Whelpling’s moveset can be swapped, so she can turn from a defensive tank with Emerald Presence into a damage-dealing phenom with Moonfire and Emerald Bite. There are many other Dragonkin battle pets available to fill the damaging role too, like the Nether Faerie Dragon which is tamed in Feralas, it’s just somewhat rare for a pet to be able to fill both roles all on its own.