This incorporeal little guy has been breaking hearts since battle pets came to be.

Nether Faerie Dragons are Dragonkin battle pets which like to hang out around Dire Maul in Feralas. They can be tamed in the open air area in the world, and are not present in the Dire Maul instance. They share a moveset with the very colorful Sprite Darters, also found in Feralas, but the Sprite Darters are drops. The two share a very similar skin as well, but Nether Faerie Dragons are transparent, which can make them just a bit difficult to screenshot, thank you very much.

Much of a Nether Faerie Dragon’s utility is wrapped up in Life Exchange, which is a fun, quirky ability to use. It equalizes the health between your Faerie Dragon and its target. Initially it completely steamrolled the Beasts of Fable. If your Nether Faerie Dragon starts off at 1384 health and Dos-Ryga starts off with 1942, if your Dragon acts first, it would hit Dos for 279 (the difference of the two numbers, 558, halved, to bring both pets to equal health). But in the earlier iteration of the Beasts of Fable, where Dos-Ryga’s health pool was over 3K, with no damage cap on Life Exchange, it was truly devastating.

Now, it’s not quite so key, because of a series of nerfs. That’s alright though, because initially, my strategy for the Beasts was pretty much just frontload a couple dragons, and now it takes a bit more strategy, which pretty much always means more fun. And still, to use Life Exchange properly involves a good bit of timing and luck, because otherwise you could heal your opponent, or get killed before you can pull it off.

Beyond that, the Nether Faerie Dragon has a handful of Flying abilities (Slicing Wind and Cyclone) and a handful of Magic abilities (Arcane Blast and Moonfire), which, along with the Dragonkin family defense against Magic, makes it a really good choice to counter Flying battle pets. Sharing a slot with Life Exchange is Evanescence, a move ability similar to a rabbit’s Dodge. It can be more useful than Life Exchange, depending on your opponent, but it’s less unique. 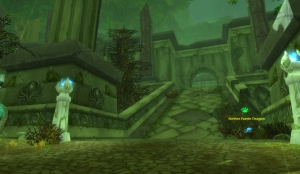 Also, I’m kind of afraid if I make this poor thing fade away more than it already has, it may just up & disappear altogether.