These Goren are getting to be more & more of a problem, seriously. 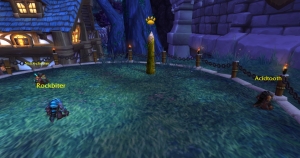 Rockbiter, Stonechewer & Acidtooth are another intrepid triad you’ll see in the rotation at your Menagerie. All 3 are humanoid, though Rockbiter likes to pretend he’s Elemental with an additional heal from Nature’s Ward. Here’s the team I used: 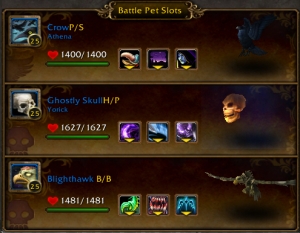 All 3 pets are relatively easy to get, though you’ll have a time of it leveling them to cap. You can obviously swap the Gilnean Raven for that Crow or Dread Hatchling since we’re using the moves common to all 3. The important abilities here are Darkness, the Flying family, and Nocturnal Strike burst. You may be able to pull it out with the new Bone Serpent that’s a bit sketchy. The Ghostly Skull’s moves are unique, with lots of frontloaded Undead dps, and there aren’t a ton of options there either because we want to use that Spectral Strike move for synergy. Your best bet, if you can’t get one, is to just pick some really big hitting Undead DPSers & cross your fingers. The Blighthawk has a lot of longevity as the anchor with Consume Corpse and Lift-Off, plus undead DPS. Big, single-hitting Undead DPS is the key here, though you may want to pick something like the Fossilized Hatchling with a heal.

So, as I said, the very first thing that happens here is the Rockbiter pretends he’s an elemental with Nature’s Ward. I’m not so much concerned with the Elemental of it all. Moreso, the fact that he now has 2 pretty big heals at the end of every round is concerning. Even though Rockbiter is ‘Elemental’ he still has his Humanoid heal. Cute. So the first thing I do is cast Call Darkness, then Nocturnal Strike. Rockbiter will burrow, but since you act first, you can always time your abilities properly. All Rockbiter’s offense is Beast, which is why having that Darkness on a Flying battle pet (which defends strongly against Beast attacks) is such a boon.

After Rockbiter leaves the fight, Stonechewer enters. I can usually get off a few high DPS moves from my now-ailing Crow, but we really want to make sure that Darkness is up so we can use the Blind synergy for the Skull’s Spectral Strike. You may want to just attack the first few rounds though, because Stonechewer has a very hefty shield, but keep an eye on those cooldowns & durations. This is also why we chose Peck over Alpha Strike for the Crow. At 250 damage absorbed per hit, Alpha Strike can’t hit Stonechewer. Neither will most Undead-style DoTs like Siphon Life or Curse Of Doom. Neither will the reflexive damage of his hugely damaging Body Slam, which is super cute. Another reason I like the skull in this slot is that I can use Unholy Ascension just to ease the suffering of the rest of the match, but that’s not necessary.

Acidtooth’s main ability to watch out for is Spiny Carapace, which deals 78 reflexive damage per hit dealt, with an increase to 234 per hit when it’s re-activated. He will reactivate it pretty frequently, and since Acidtooth’s 244 speed is faster than my Blighthawk’s paltry 230, Acidtooth effectively gets 2 turns with this. I counter this 2 ways. One is with the robust healing ability of Consume Corpse, and the other is using Lift-Off to just avoid attacking through one of those turns. I also Infected Claw, a single-hitting ability, so even when I do hit him I’m not taking too terribly much reflexive damage. Acidtooth also has a DoT with Acid Touch and the straightforward humanoid damaging Punch.

With luck, and time, you’ll be able to banish the goren back to your mines for Lantressor to deal with. 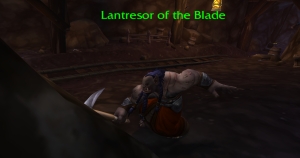