There are a lot of rumblings through the pet battlesphere about the new things coming in 6.1. The biggest, and loudest, is about the brand new quest, Unearthed Magic. 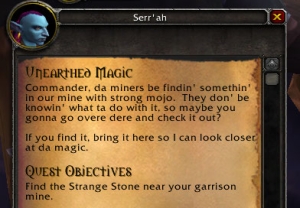 This quest is attainable at level 98. I’m assuming it requires a level 2 garrison, because the quest is given by either Lio The Lioness or Serrah, and they don’t show up until the level 2 upgrade. The quest involves–hold on to your hats–traipsing over to your Mine, looting an object, then going back to Lio or Serrah. Then you can just complete this quest, and then do it again on as many level 98+ characters as you have for this reward:

If this is going to be your very first level 25 battle pet and all you want to do is get that damned Menagerie open already, I’d suggest boosting your Terrible Turnip or your Molten Corgi. As a newbie, you’re going to need 3-4 high level pets to complete the Menagerie quest, and the taming power of the Turnip and Corgi with Weakening Blow and Superbark respectively, is indispensable. With some upcoming nerfs, you can definitely do the 3 Pests for the Menagerie opener quests with 3 freshly tamed pets without a ton of fuss.

If you have several of these Ultimate stones to burn, look for specific pets which will help you with the fights you have an eye on. If you just want to open the Menagerie and don’t care beyond that, look into the Gilnean Raven, the Aqua Strider, or any one of the myriad of traded frogs available, including the Wood Frog and Mojo. If you want to do more, like the Draenor tamers, my advice would be to consider the Turnip/Corgi first again, then a Sprite Darter or Nether Faerie Dragon, the Emerald Proto-Whelp, maybe Lil Bling. I love my Emperor Crab, but it makes a bit more sense to tame one, then use it on your taming team until it hits level 25. Try the Anubisath Idol if you’d like to backtrack through Pandaria as well, though you may have a few bumps getting past Northrend or Cataclysm content.

Also, having a level 25 means that you can buy many of the battle pets mentioned above at cap off the Auction House & learn them, or have a friend cage a couple for you. However, I would definitely caution you to do so now, as many people are going to have that same idea after they get their shiny new stone, and the pickins are guaranteed to be slim.

This accompanies a few new fights which award high XP for relatively simplistic fights, including a couple of cute themed teams helmed by Erris The Collector (here’s a video of one of them) and a really significant nerf to the Pets vs Pests teams.

If I may editorialize for a minute, I’m pretty excited about this development. Though I did have plans to create a new cascade video this PTR, I’m relieved I don’t have to (though I am a bit salty because I’d already shot & started editing it, ugh). I really hope this will let those who want to open their Menagerie a chance, without the bothersome grinding of it all. I do know some are worried that this makes things too easy, but new battlers will still have a lot of work to do in grinding up their stables. And heck, even that one dude with 100 level 100s would only be able to cap 1/6th of the current top pet collection achievement, leaving lots of space for continuing with pet battling if you’re interested once you can shoot past the grind for the fun puzzles of it all.

I will caution those of you going this route, however, that the battles against any pets in the Garrison do not count toward the garrison monument. It’s a minor thing in the face of those sick gainz, of course.