Time for a new Pet Leveling Challenge update. I have to say that I did wuss out a little bit.

I’m still doing things only by pet battling, but I ‘allowed’ myself to start doing pet daily & weekly quests. It was extremely time-consuming to travel from place to place on foot, and there was really no way for me to gain any coin, so it would’ve been this way forever. I wasn’t even able to use the taxi service.

Ugh. I’m not going to be flush with cash at all, especially because I’m still avoiding the Auction House as a part of the Ironman rules. I also transferred her from my mega high pop main’s server to a different one when they opened up free transfers, so now when the queue on the main’s server is too long I can still log onto this character.

The result of both of these actions is that idea of logging onto that character doesn’t make my skin crawl anymore. While it would’ve been cool to hit level 90 in Northrend on foot, the idea of having to, for instance, walk all the way from the Alliance base in Howling Fjord to the area where fjord worg pups live alone made it extremely unlikely she’d be hitting 70, let alone 90.

The reason I mention the worg pups is because mine is still Common quality. I figured while doing this challenge, I’d have more than enough opportunity to capture all the rares in the areas I could access (places like Pandaria and much of Cataclysm content are still off-limits, because you have to complete a quest to access them). Getting those rares make for an easy carrot as I’m grinding through this punishing slog, but I’m so sick of looking at my remaining Common pets, especially as I level other alts through Northrend. Those worg pups are right there.

Just right over there. Sigh.

And that’s a big part of why I’m kicking this leveling project into high gear. At this point, I’ve been avoiding leveling the bulk of my stable, because once my pets get too far above the level of wild pets, I have to go on only PVP fights until I level my character and schlep to a new area. I’ve been in the Arathi Highlands for ages. It’s really difficult to say, especially as I get toward the top of the pet levels curve, just how many I’ll need, so almost all my pets have been in stasis around level 11 until I can get this done. Warlords of Draenor is right around the corner, so I really need to get a move on here.

The other thing I have to report is that, because of this project, I’ve been doing a good deal of playtesting about player XP through pet battles. I’ve made a previous post or two on the topic. This is a level 88 character, battling with a full team exactly the same level as her opponent.

So, once I’m able to roll around Swamp of Sorrows or Un’goro Crater, that’s it. That’s the most XP I can get from a battle, as long as I’m not trying to fight single pets. The player XP also scales down if I fight with pets slightly higher than my opponent (around 20K XP per pet level at this player level). The only scaling in player XP from there on up will come from my leveling up. This is kind of both awesome and awful. I am glad I don’t have to rush to Northrend, but I’m curious how quickly that scaling will happen, and just how quickly I’ll want to ditch this project again. 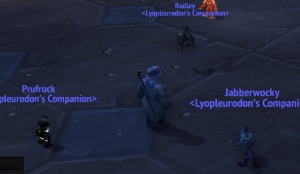