Before we get this blog post a-startedddd, let’s get this out of the way. This particular part of the game has been re-tuned roughly a dozen times since it’s hit the servers, and it’s only been live for 3 weeks. I’m going to discuss in general terms so hopefully it stays relatively accurate for a while, but don’t be surprised if it’s the exact opposite from what I say here if you’re reading this from far in the future. Also, don’t get all pissy because I got 70 XP and you got 75 XP for the same freaking THING Liopleurodon, you SCREECHING NOOB, GOD. Clear?

When 5.2 dropped, among other fantastic pet developments, Blizzard also added the ability to get player XP through pet battles. Like everything else in the game, this can be very quirky.

There are a few rules of thumb which have stayed consistent thus far.

1 – *ALL* the pets on your team must be within 3 levels of the pet you’re killing in order to get XP. Yes, even if you just have your level 25 terrible turnip in the back row just in case and never ever use him, your character will not get XP.

2 – You must win the fight or you don’t gain any XP, even if you kill or trap a couple pets before you lose. This also applies in PVP.

3 – The amount of XP is dependent both on your level and the level of the pets you’re fighting. This post has been a wall of text with no pictures, so here’s a level 2, 15, and 85 characters fighting the same level (ie, lvl 2) pets: 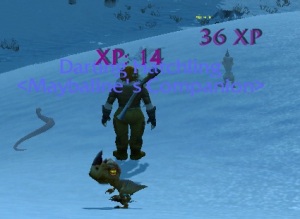 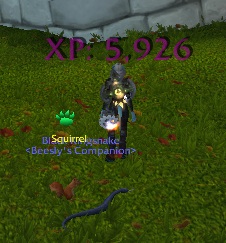 I got 5.9K xp using my level 3s against level 2s. In the next screenshot, I used level 25s and a level 24 against a level 23, and in the following one, I kept them all at or below the level of the pets I was fighting. 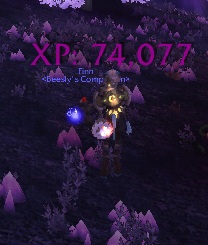 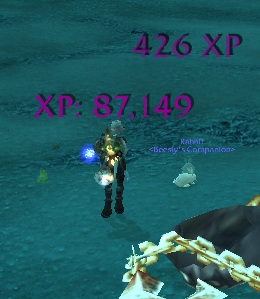 The interesting part here though, is that it seems like there’s only so high you can go with XP. For level 85s, you will get a maximum of 87,149.  The range of pet levels you’re capped out seems fairly wide.

Yes, you do get XP from tamer battles too.

To contrast Major Payne’s 25s, I was fighting 18s in Hellfire Peninsula, which is a couple dozen levels beyond gray mobs for a level 85. The gap may be even larger though. I didn’t get a chance to do further testing, as in the process of pet fighting, a fel reaver sneaked up on my poor little unplayed alt. 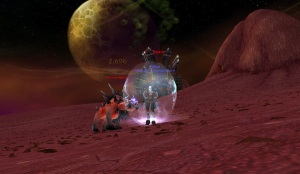 You may want to send flowers.

4 thoughts on “Your Leveling And Pets”