My current aim in-game is to get rares of every tamed pet. As a result, I’ve spent a lot of time hanging out in Dalaran Crater, looking for a rare Lofty Libram. As I flapped around uselessly killing dozens and dozens of rats, I noticed something odd.

I saw the towers of the Undead in the not so distant distance, and in between this pinnacle of unstable magic and the plague-happy undead, there was… a farm? What kind of wacko would try to farm there? I mean, Arathi Basin notwithstanding.

As I moved closer, I saw the traditional yellow exclamation point on my map. Current for a level 90. Alright, this is going to be good.

Alright so, let’s pick up the quest and… WHOA.

This is a takeoff on the popular tower defense app, one of my personal favorites, Plants vs Zombies. You’re in a ‘vehicle’, so even if you do this on a PVP server you’re unattackable for the duration of your quest.

I use Pitbull and Dominoes, and it screws up the buttons a bit. The display is where the abilities are located for the last leg of the quest. Mousing over each button gave me the information of the ability in the tooltip. The quests will walk you through playing the game bit by bit, what each plant in your arsenal can do, until you get to the big show with the full complement of plants.

Then, after you finish the quest line, you get a pet! 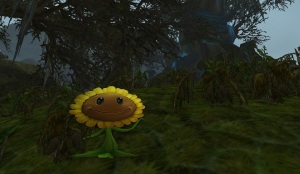 The Singing Sunflower is pretty much junk. It’s an alright support pet, but it has pretty much no offensive oomph. It’s annoying to kill if you don’t have a pet with a weather change ability, and I could see it being somewhat less junk in PVP if you’re less lazy than I am and keep track of cooldowns and swap it out a whole bunch, but UGH. 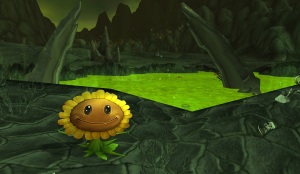 Every so often, the Singing Sunflower lives up to its name and randomly starts singing. In the AH. In dungeons. EVERYWHERE. The song is a short snippet from a song in Plants vs Zombies, voiced by the person who sang the PvZ song. In fact, because of the traffic to her personal site from searches she also has her own how-to guide for this pet.

The great part is, this song will get stuck in your head and stay there for days. And then, every time you pull it out again, you will repeat this. It is unstoppable! It is inexorable! It is–