Mr. Wiggles has always been a favorite of mine. Back in the day, he’d stay by my side and eat schmutz he found on the floor in Scholomance despite my strident caution that he knock it off because it was probably tainted by the plague. Wiggles don’t care. He just eats what he wants. 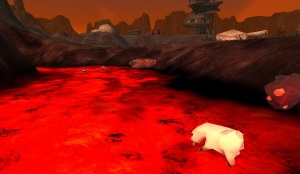 Big, bad boss pulls in years were typically accompanied by /say Let’s do this, Wiggles. He was my lucky charm in raiding back when it was only pets, no battles. He also took up a space in my inventory. Uphill in the show! You whippersnapper.

So it’s really oddly fitting for me that he is currently the only attainable pet on US servers with the ability Uncanny Luck. If you’ve been fighting Lucky Yi, the Beast of Fable a stone’s throw from Nishi, you’ll have seen this in action. Because of the nature of this ability, I predict that pet PVP in 5.3 is going to see a bunch of matching up Wiggles with other pets with lower chance to hit abilities, like Moth Balls. Maybe not, I’m pretty terrible at pet pvp.

Beyond that, he’s a fairly standard critter. He has either a critter or undead dps in the first slot, a heal or 50% reduction ability in the second, and Uncanny Luck or a chance to stun with damage in the third. The key though, is going to be using his Luck in synergy with other pets. This will become more evident in 5.3, when chance to hit stuff becomes a part of the standard UI.

You get Mr. WIggles from the original Childrens’ Week quest from either Orphan Matron Nightingale in the Cathedral District of Stormwind or Orphan Matron Battlewail in the Drag (lower level, beneath the inscription trainers) in Orgrimmar.