The thing that’s tricky about pet battling addons (really, any addons) is that there are certain things that Blizzard eventually subsumes into their own default UI. This is definitely noticeable if you swap between your regular install, with its huge folder of addons, and the PTR, which is fresh and new with only the default UI. For instance, one of my favorite battling addons for a long time displayed a pet’s quality without a spreadsheet of numbers and a bit of guessing. This is a part of the standard battle UI now, though.

My first must-have addon is like this in part. PetBattle Teams can currently be used to maintain the abilities you prefer through swaps if you set those pets in a ‘team.’ Here’s a screenshot of my UI:

You can see here that I’ve selected the Aki team. You know from my fantastic Aki walkthrough that I use Radley, Ishmael and a leveling pet, so the team should come as no surprise. This addon saves the 2nd tier abilities Radley uses so I don’t even have to futz around with that. I just click in the right panel, and it equips the team of my choice. The question mark is an intentional blank spot for that pet I level. You can also see the health bars of the pets… if they’re dead, it puts a nice big red X over them (but you can still click on the team to equip it). At the very bottom, it also has buttons to press for the healing ability and the bandages in your inventory. This saves me so much time. I really recommend it.

This is one I expect to get added into the Blizz default UI sooner or later:

Battle Pet BreedID may sound like Sanskrit. Basically, there are a few different ways stats can be allocated in the same pet… some are faster, some are stronger. This is useful information because there are certain abilities which work far better if a particular pet is very fast or slow. Some pets need high HP because you’d like them to be tanks. It’s not something to worry super hard about until you get really deep into endgame, but it’s good to know regardless. If you look at the screenshot, you can see the difference between the stats at level 25… it’s not a huge difference, but it can help you eke out a win.

This addon shows you the breed of the pet on mouseover, either in battle or your journal. (either in numbers or H/P/S/B format) It also shows which breeds are available, so if you tame say, a Lofty Libram, you can know that the H/B breed you got (which is generally kind of a crappy breed) is the only available breed. I opt to switch to the H/P/S/B version of the data rather than the breed number, because come on, that’s just gibberish.

This last one is a small one, but it’s really invaluable to me. It’s called Daily Tamer Check: 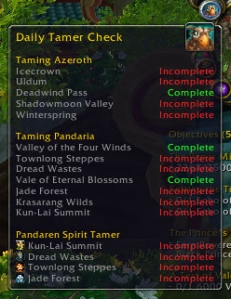 And that’s all there is to it. Mouse over that little moonkin icon, either on your taskbar, in Titanpanel or what have you, and it tells you which dailies you’ve done that day on that character. It isn’t an advanced addon, since it can’t tell which alts you’ve done them on as well, but for my purposes it’s very cool. It’ll also tell you which non-bag dailies you’ve done in a sub-menu, and during the Darkmoon Faire it also displays Jeremy Feasel.

Any must-have addons I missed?