Much like the Wolvar hatchling, only much more tongue & teeth in the bargain. 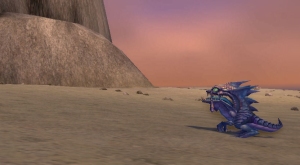 He has the same Humanoid benefits as the Wolvar pup, but his abilities are quite a bit different. A couple of his abilities go back to the Wrath rep he’s associated with, namely the really gross Aged Yolk. Between the teeth and the yolk, this apparently gives him Dreadful Breath.

The dreadful breath ability is a fun one to mess around with, especially when paired with a frog or strider who can make it rain (not in the way that involves strippers). Backflip can be strong in PVP depending on how fast the other pet is. Super Sticky Goo is a decent choice for pvp too, though in general this isn’t a very strong pet in pvp. He doesn’t pack a strong enough punch before he’s completely annihilated, depending of course on the rock paper scissors of it all. There’s always the gross out factor, I guess. 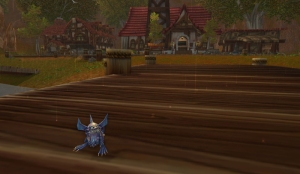 I guess he’s cute from far away. Maybe.

The Curious Oracle Hatchling is obtained by doing the Northrend Childrens’ Week quest given by Orphan Matron Aria in Dalaran.