I’ve recently been working on taming all rare versions of various pets, which means a lot of farming. This post may end up being more alcohol-fueled rant than actual useful information.

The thing most of these strategies ignores is that there is a max number of battle pets which can be in any given zone at any time. What does this mean? Well, here’s a screenshot of the area where the Minfernal spawns in Felwood on my cross-realm: 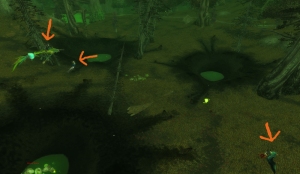 The orange arrows mark different players just freaking sitting there until one spawns. There were no fewer than 5 people just hanging out in the area when I went through on my way to find a rare Tainted Moth.

Now, hanging out on a mount and watching videos until you see something spawn is a somewhat solid strategy. The Minfernal is on a long timer and is very rare. However, in this deceptively large zone, there are many potential spawns for battle pets in semi-out of the way places. Once those spawns are populated by a battle pet and not a critter, they use up a slot that could be open for a rarer pet type, or just a rare spawn of that type. Less than 30 seconds away via flying mount, this is the scene: 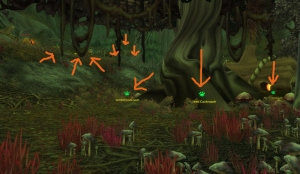 3 separate camps of 3 roaches, all filled with battle pets. There are a few more in this area too. All along the edges of the map, there are roaches and rats galore, just waiting to be curbstomped by some lucky tamer.

In general, this happens when there are a bunch of grouped quest mobs, as here. Lowbies with AOE come through and kill critter-type roaches, and tamers kill other random pets in the zone. People generally see the paw prints and steer clear, because despite what trade chat would have you believe, most players aren’t just waiting to snack on a trio of billy goats.

The thing is, this strategy (and really, all other taming strategies) only work if there’s somebody else in the zone killing the other random trash battle pets. If they’re not, you’re just going to be moonfiring rats like a chump all day long with no payoff.

So, what’s a tamer to do? Before you sit down to farm your desired pet, take a minute and fly around the zone. Does your minimap look like this?

If so, you need to take a few minutes out and free up those spawns, either by fighting them or by giving them a moonfire to the face. And yes, specifically target them and use a single-target ability rather than the flashier, easier AOE. If you kill other, non-battle critters as well, that gives those critters a chance to steal the battle slot you just freed from your desired target. Then, go do whatever magic trigger wowhead suggests. If a half an hour or so elapses and you still don’t have any, or very few spawns, go to the areas which were the most densely populated before, like the above pictured Timbermaw camps, rinse & repeat.

Yes, yes, I know. All the minfernals in the world will totally respawn in those 30 seconds, and everyone else will get them all and you’re going to get none and nobody likes you and you’ll die alone. That’s really a personal problem I can’t help with. I’m just laying it out there… you’ll get better results farming pretty much any rare pet you’re looking for by killing other pets first.