Legs is one of the newest kids on the Childrens’ Week block, so he’s likely the one you’re missing, if you’re missing any. He was added to the Shattrath orphan roundup in 2011.

He’s quite unique, in that he’s a Magic pet with a mix of Magic and Aquatic abilities. The very new Tiny Blue Carp from fishing (mandatory uuuugh) is the only other pet I’ve run across which has a mix of magic and aquatic. The Carp is aquatic though, so it’s vulnerable to the flying pets which would be hurt more by the magic damage.

The aquatic abilities used by Legs are the very strong nuke Pump and the CC ability Whirlpool. He has a similar magic CC ability in Gravity. Surge of Power is a huge magic nuke, but a risky one as you have to ‘recharge’ after using it. Laser and Focused Beams are his bread & butter damage abilities. He doesn’t have avoidance abilities, so he’s pretty much a glass cannon.

Even though he was the last to be added, to me he’s the one that makes me reminisce the most about the Burning Crusade expansion. Sure, Peanut kinda looks like an elekk, and there were those beholder mobs in that one Tempest Keep dungeon. Zangarmarsh was one of the most unique environments Blizzard has designed thus far though, and Legs looks like he was directly lifted out of the swamp. 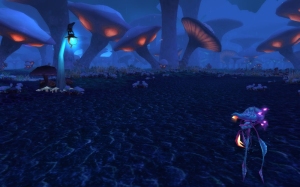 Legs is obtained by doing the Outland Childrens’ Week quest given by Orphan Matron Mercy in Shattrath City.