They increased the drop rate in a hotfix yesterday, so I got one this morning.

But between the behavior of others and the general drama and rolling back and forth through whine-tinged vacillation associated with this one last lousy pet, it doesn’t feel like the culmination of a nearly year-long grind, like the capping accomplishment of pet battling it should be. I expected to unveil this with a flourish, to let you see what my effort of nearly a year has won me, but I find that I don’t care so much, anymore.

This isn’t an informative post so much as a traditional musing, navel-gazing blogger-style post, so you may want to skip it.

I’ve often said that the Pet Battle game is like the entire game in miniature. The PVP/PVE divide in particular is kind of amusing to me. The thing is, through this, while there have been some trolls (eg, Triple Turkey, round wait trolling) and the cries to buff or nerf as usual, the pet battle community has been almost entirely helpful and encouraging. I’ve tried to foster the same, because this makes it a fun and fantastic place to be.

I’ve been blogging solely about pet battles since February. Right now, roughly 70% of my time in game is spent battling or running around like an idiot taking screenshots (25% is doing archaeology to get a crawling claw, 5% is standing around looking at how bad my transmog is). And even so, looking at my rankings at WarcraftPets or WoWProgress, I’m barely in the top 50 of my server right now, let alone my entire CRZ group. If one guardling was awarded every 6 hours to the person ranked at the top who hadn’t yet received one, to the people who arguably did the work to “deserve” it more, I would still have weeks to go.

On top of that stat, I gained the 2nd-to-last achievement for this in December of last year, 7 months ago. Of course people are going to be upset that, on the day this goes live, these pets are exceedingly rare. They came here to get a pet, and having to leave empty-handed sucks whether it’s a Guardling or a Minfernal or a Snow Cub. That suckiness is added to a unique pet with a unique moveset and this ultimate-style achievement, and of course people are disappointed. It sucks whether it’s a pet, a playstation or if they just ran out of your favorite kind of doughnut at your local doughnut place. It’s human nature to be disappointed by this. And it’s OK to say, “I am disappointed this pet is so rare,” or even, “I wish this spawned more rapidly,” without being instantly pointed to as a whiny baby boohoo crier or having some deep-seeded personality flaw.

I have a hardcore raiding past and I have a few elitist jerk tendencies I’ve tried to quash. Oh hey did you just say you wanted to see a screenshot of me on the Time-Lost Protodrake I nabbed in November of 2008 for my birthday after getting server first hunter and dwarf, using my Obsidian Slayer title? 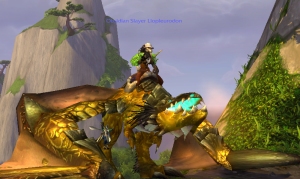 As such, I’m not going to lie you guys, the spawn rate on this pet has really brought out some of the worst in me. I’ve talked civilly with some of my fellow campers, most of them from some other server, commiserating about how crappy this whole thing is. But internally, and maybe out loud at my screen a little bit, I’ve been saying, GET OUT OF HERE YOU NOOOOOB most times a random person catches one. I am torn between saying, ‘that’s a hard one to get, congrats’ to the person who says, ‘yay, now I just need to get the Minfernal!’ or ‘haha, now I’m just waiting until winter for an owl now!’ and allowing myself to become one with fury, to open wide the first of my seven maws of death, let loose the swarm of locusts and sing the ancient song of destruction.

But the side of myself Mr. Rogers would be proud of has won out, in my case. Congrats, grats, good luck getting that Whelpling you rapscallion, grats, etc, whatever. “When you wait / you can play, sing / or imagine anything,” so I was using the time to draft a few posts out in longhand (I don’t dare tab out) and seething privately. It’s pretty much the opposite of the haggard, hard-won victory this achievement should be. It definitely wasn’t fun by any definition. Other tamers have been… not so kind, between hurling insults, killing pets to ensure their rarity (or whatever), flagging for PVP and standing on spawns, and just general jerkface behavior.

This outlandishly awful behavior, plus the newly hotfixed buff to the spawn rate of the Guardlings, makes things seem problematic. There is a lot of speculation that Blizzard somehow caved to this behavior, to the whining, to the jerkiness the pet battling community has suddenly devolved to. I doubt this, just on the fact that they did it via a hotfix instead of waiting for maintenance. At least, I hope this isn’t the case, because I like my little community the way it is and if Blizzard begins granting wishes like some kind of big blue genie it’s going to get even worse. They typically don’t have a habit of doing so unless something is really egregiously awful to do, like the A Mask For All Occasions achievement, which used to be required for the Long Strange Trip meta-achievement. Removal of that achievement from the meta didn’t lead to societal anarchy (beyond the typical anarchy, of course), and I doubt this really will, either.

Happily, with the buff, the community’s willingness to be considerate seems to have righted itself, and my experience is that people are generally being more helpful around the spawns. But we’ve been shown what the dark side of pet collecting is, and it continues in that mirroring of the full game… we’re just as vulnerable to elitism over who should be allowed to get the good stuff, whether it’s ilvls or a last dumb pet, as raiders are. Unlike ilvls, if some other (less-worthy by who knows what internalized metric) player tames a specific pet spawn, that means I cannot tame it, so there is then an active incentive to troll, grief and otherwise wreck another player’s day… regardless of whether it might make Blizzard change their mind WRT rarity.

I know that I personally have done a sort of penance, hanging around and cheering people on. Besides which, this whole blog is kind of dedicated to helping people with pet battles, so I’ll be building my karma back up with helpfulness accordingly. I still feel guilty about it, and if you’re on my cross-realm I apologize for my thinking you were a noobface jerkwad who SHOULDN’T BE THERE GRAWWWRG.

For the record, I’d advocate that nearly all rare spawns should be made less rare, not just this one, and not even necessarily just the pets. In pet battling the effort expended in collecting them all, and especially when you throw in rare quality (ie, blue) pets, is enough to make any pet feel special. For me, one of my hardest won pets is still my rare quality, crappy breed Grasslands Cottontail. I still break out my Perky Pug Bertha both for battling and as a companion, and she is literally the most common pet in the game. There are rare pets in battling that feel far less rare than some which are regarded as common anyway. An Unborn Val’kyr? Ho hum. Like every 3rd team uses a Val’kyr now. They’re OP but everyone uses them the same way so when I see one it’s kind of a snooze. But if somebody comes at me with an Elder Python or a Moth, I sit up and take notice. 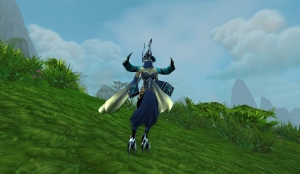 Beyond all the sturm und drang of this whole mess, the Qiraji Guardling is a fairly solid pet. It uses a combination of humanoid and flying attacks which is unique to this pet, unlike its Winter counterpart the Snowy Owl, which is identical to the other owls, Miniwing and the Brilliant Kaliri. The Guardling has the AOE ability Whirlwind, which doesn’t play too well with the very strong PVP ability Sandstorm. There’s also the Pyrrhic strong hitter Reckless Strike, and a stunner Blackout Kick. It looks to be strong both for PVE and PVP, so now that the spawn rate is buffed, make sure you go grab one ASAP, before the summer is out.

I’m not going to say whether I would’ve written that last sentence if the spawn rate wasn’t buffed (hint: ashamedly, I wouldn’t).