Update for 6.0: This strategy still works really well as a two-pet leveling strategy. If you’re here for an Awfully Big Adventure with your Elekk Plushie, this works perfectly well for that, too.

It is about good freaking time I wrote this, but I’ve been putting it off.

This Spirit Tamer uses a gimmick I’ve seen parroted a few times in PVP. It combines huge damage with stuns, but it’s relatively quite easy to counter if you know what’s coming.

Here’s the lineup I use:

There are a few other ways you can go. The Tamer’s first pet is aquatic, so I use my dragonbone hatchling Legree to counter. I would definitely recommend something that does a lot of Flying damage with some kind of avoidance, namely Lift-Off. A moth with Cocoon also works, but not *quite* as well. My speedy rabbit Dill is there for the dodge/burrow combo. We’ll get into why in a bit, because I use it a little bit differently here. I’d recommend keeping with a critter, because the last guy is elemental, and you definitely want at least a Burrow or Dodge or something. A Core Hound Pup might be an alright choice if you have one. I initially did this fight with my Perky Pug, so just the one avoid can work, too. The pet to be leveled is fairly high level and not Mechanical because there is a lot of AoE flying around.

The first pet is an aquatic fish named Marley. He has Dive, Whirlpool, which pops up a lot on Emperor Crabs in PVP, plus Pump, which makes all those abilities hit harder when it’s active and then gets unleashed for big damage.

Whirlpool is particularly devastating in PVP, because it restricts swapping, but here it’s just a lot of damage. He’ll also pair this with Dive, so that if you don’t avoid it somehow, it’s a huge amount of damage all at once. We’ll use Liftoff the turn before it blows up to avoid it, easy peasy. I prefer a bird with Lift Off to Cocoon, because Cocoon will only avoid one hit so you’ll take lots of damage from Whirlpool or Dive (because as a flyer you’re going to be faster), but my experience is that a moth can rip through here fairly easily regardless.

Next up is the critter Tiptoe. He has an AoE with Tidal Wave, a straightforward nuke, and a heal. You want to kill him ASAP because of the AoE. I just keep attacking/avoiding with my Flying pet until it dies, and then swap to my rabbit. Tiptoe doesn’t have a lot of burst damage, but if he heals a lot you’ll find yourself with a dead back row.

(NOTE –  As of 5.4, Tiptoe the strider is now properly classed as an Aquatic battle pet. However, I still use the strategy as performed, and really, we’re a bit better off because the Flying pet we used for Marley continues to have strong attacks.)

Kill him ASAP. I use Burrow to try to get big damage, but other than that, don’t worry about defense with your main pet. You’d just be wasting the turns you have until his heal comes off cooldown.

And now, Ladies and Gents, the gimmick. 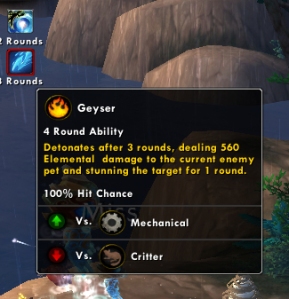 The Flowing Pandaren Spirit casts whirlpool like the fish, but pairs it with Geyser for enormous damage, at the end of a round no less. Luckily, with your rabbit, you can just use your Dodge or Burrow abilities to avoid it.

I don’t use the typical rabbit ‘pattern’, because after the first set where both Whirlpool and Geyser hits at once, the two abilities are out of sync. I use Dodge to counter one and Burrow to counter the other. If the pet you chose is working off just one avoidance ability, avoid the geyser. You should make it past the first one no problem as they’re sort of synced up, and you’ll likely make it past the second series at the very least. 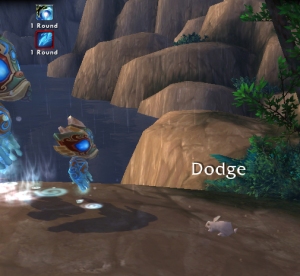 I’ve been seeing the geyser/whirlpool combo in PVP a few times recently. The only pet with this combo is the mini Flowing Pandaren Spirit, so if you see that coming, you know what you’re in for, but you can try using whirlpool or geyser with Dive for another decent combo.

In the end, you’ll be able to beat this spirit rather handily, even if he doesn’t make for a good choice to level lowbie pets.

The reason I was waiting on giving him his own walkthrough is because of the central conflict of Mists of Pandaria. It makes me deeply sad to think of this Spirit Tamer, being here for time immemorial, training his pets and enjoying the natural beauty of southern Krasarang Wilds. Long before Garrosh took to destroying the beauty of the Vale, he also ruined the serenity and beauty of this Tamer’s far-flung locale.

We’ll get him little guy, though it’s cold comfort now.

I also made a quick & dirty video of this fight if you’d like to watch for more help.