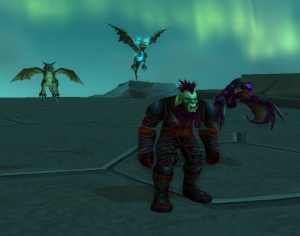 This guy is one of the hardest tamers you’ll come across as you level, for a variety of reasons. It seems kind of silly but I’m breaking him down before some of the later guys, because he’s such a big stumbling block for so many players. 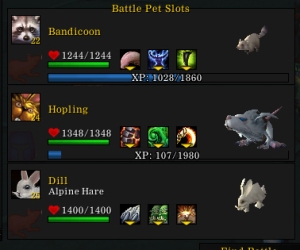 I went with the Hopling because of the single-round stun. You may want to use something like a Flayer Youngling, the Anubisath, or another humanoid. I wouldn’t recommend the Kun-Lai Runt, because he’s at his best with stuns, and stuns are generally a bad idea in PVE (the NPC usually switches out a stunned pet, so you don’t get the benefit). For the second pet, I have my speedy rabbit Dill as usual. All these pets are fairly slow though, so even my H/B rabbit is faster than the second two pets. Almost any critter will work here, but the mitigation on the rabbits is really nice, as always. If this is your first time fighting him, go with a humanoid and 2 critters, hopefully with a dodge, burrow, a heal, etc. Some kind of avoidance and longevity, basically.

The first pet, Drogar, is a violet-reskinned green proto drake. He has a Flying mitigation move, Flamethrower, and a self-heal. I go with the humanoid here to kill him as quickly as possible, hopefully before he can heal too much.

This is the tricky part. The rest of the dragons on his team are undead, so a humanoid is not so helpful. However, the next pet uses elemental damage, so it’s not like he’s just going to flop over. I use the Hopling until he dies, then swap to the rabbit, which deals extra damage against undead.

At first we’re going to just attack, until Sleet casts Ice Tomb. Then, we’ll wait a turn and use Dodge or Burrow, or whatever avoidance ability your critter has.

This is mostly because it’s a big hit and not so much because we have to avoid the stun, but if you want to use a pet without the critter family stunbreaker that’s a consideration too. Being undead he’ll resurrect for a turn, but you should be able to dispatch him fairly easily.

The last pet is Rot, a Scourged Whelpling, with a ground AOE attack, plagued blood for a small heal per hit dealt, and Shadowflame, which does middling damage. It’s a particle-effecty good time. 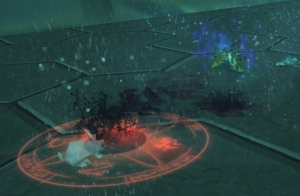 Just keep on hitting him and dodging where necessary. This is the easiest part of the fight, but don’t get too cocky. Use your avoids against Shadowflame when possible and burn him down. He’s also undead, so make sure you have enough health or pets to get past that one last round.

This may take a few tries, but just take deep breaths and keep going.

For your Awfully Big Adventure with your Elekk Plushie, I’d recommend the Anubisath Idol & Rabbit combo.