As discussed in my previous entry on the Celestial Tournament, you have to fight a varying set of 3 tamers in order to get to the 4 Celestial bosses. One set is Chen Stormstout, Wrathion and Taran Zhu. Here’s a bit of rough strategy for this triad.

Wrathion tickled my fancy, largely because of the names of his pets.

He always starts off with Cindy, who is undead, followed by the dragonkins Alex and then Dah’da.

Generally speaking, I found Cindy the most difficult to figure out, largely because she is very fast. She starts off with 375 speed, meaning that the speed breed rabbits are on equal footing with all the other rabbits, ie not sucky, but not a total lock either. Her 3 abilities are Bite, Blistering Cold and Ice Tomb. Ironically, of the pets I had available (no bandicoons, which I think would theoretically be good) the best against Cindy were crickets. With a self-heal, cocoon (used mostly against Ice Tomb… the Blistering Cold DoTs didn’t trip it) and decent damage against Undead, the cricket usually made it well through to Alex without much issue.

Alex has Breath, Flamethrower and the healing Ancient Blessing. Dah’da has Shadowflame, Roll and the heavy damage, big stun Elemenium Bolt. The reason I’m discussing them at the same time is because both were rather summarily dispatched by my Anubisath. Deflect against Elementium Bolt was especially key. I opted for the shield rather than Sandstorm because I wanted to avoid the accuracy debuff, and the shield worked fairly well, especially against Flamethrower’s DoT. Dah’da’s Shadowflame hits fairly hard regardless, especially with the roll buff. I had to get in one last swing with a Grell once out of the three times I tried the Anubisath in the second slot, so this may be a candidate for a leveling slot. Bizarre.

Chen’s beast Tonsa is rather formidible, but I was generally able to get the critter Chirps and elemental Brewly down using just a Panther Cub.

Tonsa has Bite, Headbutt and Chew. The best mechanical for the job here seemed to be a Clockwork Rocket Bot of whatever color variation, even though the one I had at hand was only Uncommon. I used Toxic Smoke and Launch Rocket in particular. The Darkmoon Zeppelin with Block worked really well too, but I like to save that one for later.

Chirps is very interesting. He has Flank, Lullaby, which puts your current pet to sleep for 2 turns, and Locust Swarm. Locust Swarm is also a completely new ability. It’s like a cross between Swarm and Deep Breath, where you charge up a round and then the next round he deals ~700 damage across 3 hits. It’s pretty brutal, but you can kinda dodge it. However, he’ll also use Lullaby then use that next turn to charge up Locust Swarm. Luckily he has 281 speed so when I fought him, I used a panther cub to wreck him in under 3 turns. Nearly any cat with a Prowl will work here. I was even sometimes able to finish out the last pet, Brewly, but that was fairly hit or miss.

No, I mean, literally hit or miss. Brewly has a new ability called Inebriate, which decreases your accuracy by 25%, so sometimes I could wreck her no problem and sometimes she just sat back and laughed while my panther ineffectively pawed at her. I kept a strider in my pocket, and was able to finish out the fight without too much limping toward the finish. She also has the rather gross Barrel Toss and Brew Bolt, which is a relatively straightforward aquatic nuke. 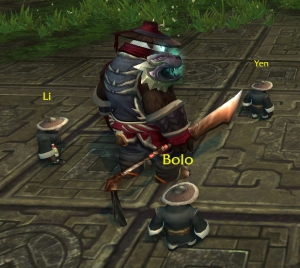 To be completely up front, I wasn’t able to nail down a precise strategy for Taran Zhu. I was able to beat him, and notice some patterns, but I wasn’t yet able to replicate a win every time with a particular setup.

As you can see from the screenshot, he’s playing the part of PVP troll with 3 humanoid pandaren monks. But, only one of the monks, Yen, uses an ability player monk pets even have. It’s the stun, Blackout Kick. Yen in particular is a total jerk, also getting the critter ability Comeback, which hits hard against the Humanoid countering Undead, and Feign Death, which pulls him out just as he’s getting hit hard (and dodges any DoTs you may have up on him at the time in addition to your turn that round). Li has Triple Snap, the new heal ability Bandage, and Spin Kick, which is new, but functions very similar to Backflip, just with higher baseline damage. Bolo uses Punch, Blinding Powder, which gives you 0% chance to hit for one round, and Rampage.

To counter, my best strategy was to use Undead pets with big DoTs, namely Curse of Agony and Curse of Doom, especially against Yen. I did try to time my Curse of Doom so that, for example, Yen wouldn’t dodge it, and it would hit Bolo on the rounds I didn’t have Blinding Powder in my face. I did alright with a Stitched Puppy and a Howl/Diseased Bite combo. The thing is, typically if Yen started off with his Critter ability, I was pretty much toast before I even got started… the Gusting Grimoire, Lofty Libram or Lesser Voidcaller might be the answer, but I didn’t have those to use.

[Update 8/29/13] – Rather than the above magic pets, I ended up making liberal use of Mr. Grubbs. His Acidic Goo plus the Scourged Whelpling’s very long DoTs and the healing on Consume made this another duo fight! You do have to be careful and count turns a bit… when I timed it properly to Burrow through stuns and debuffs he really shone. If you don’t have Mr. Grubbs, any maggot or larva will work. If you don’t have the Whelpling, try a Restless Shadeling, maybe. Death & Decay was really the workhorse in this fight, oddly enough. 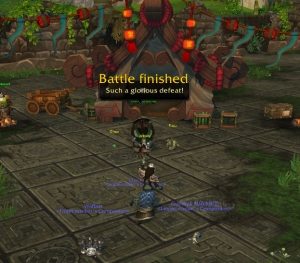 The big, overarching theme to keep in mind with all these fights is that once you use a pet to fight a particular tamer, you’re pretty much not going to want to use it again until after the entire scenario is complete. There are certain pets which would do well as a family counter to say, Chen’s Tonsa, but because you’re going to want huge burst against Zao (and maybe even against Xufu, but that’s another post) you need to keep a few heavy-hitting mechanicals in your back pocket… like discussed briefly above, the Darkmoon Zep can be very useful later.

Leveling Worksheet (italics means this suggestion carries to another triad): Anubisath, an undead and a maggot, a cat with prowl, a critter with some avoids, and a mechanical (specifically a Rocket Bot if you have a stone available, or can find an upgraded one).