9/25/2014: This fight is now up to date for Warlords of Draenor. For an Elekk Carry, simply use the advice for a regular carry.

Nishi was the laughingstock of the Pandaren tamers for a good long while. Most player tamers could solo her with nearly any level 25 battle pet. Located in the heartland of Pandaria’s Valley Of The Four Winds, she made an easy target even for those level 86 alts. 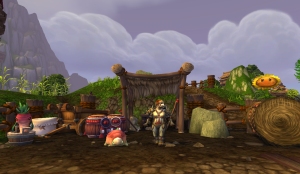 The abilities her pets avoided using in order to make her such a pushover were suddenly back in full force. Luckily, like most of the other tamers, as long as you know your counters, you are good to go. 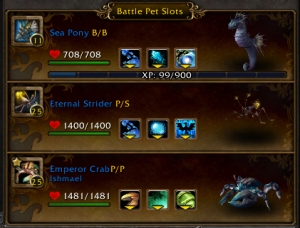 The Strider has a lot of very strong aquatic offense and a weather effect. I’ve used frogs in this slot too. Either is fairly reliable as long as you make sure to switch in that weather effect. The crab is pretty much just there for cleanup. I’ve used mechanicals in that slot, because this battle pet will be facing Nishi’s beast, but if my first pet goes down early this can make for bad times because the rest of Nishi’s pets are elementals. A Flying with Lift Off or the Anubisath Idol makes for a good anchor too. 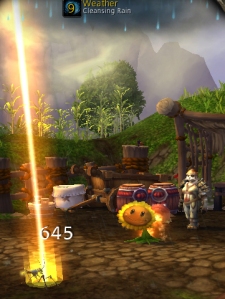 The biggest chunk of your strategy begins immediately. Nishi’s Siren has Solar Beam, which hits very hard normally, but tacks on an extra big hit if it’s in Sunny weather. So of course the first thing Siren does is cast Sunlight. You need to change the weather, now. You have an intervening turn where Siren casts a heal on itself before it’ll explode your pet’s face off. If your first battle pet is above Siren’s speed (280) you can put in your carry pet off the bat and enough time to change the weather. However it’s important to note that if your pet is at or below 280 speed you won’t, so you’ll need to start with your first ‘real’ battle pet, and then swap in the carry pet further down the line. In this case I usually switch in the carry during Toothbreaker‘s Sons Of The Root, and make sure my carry is above level 8 or so. Either way is fine, but you just need to be aware of it before you start.

After you change the weather, beating Siren ain’t no thing. The very first thing the next pet, Toothbreaker, will do is submerge and start hitting you with Sons of the Root while he’s immune. When I use the Strider, I use these turns to do things like heal (by casting my weather again) and set up Pump. You really just have to wait a handful of turns while you take a bit of damage. Just stay calm and take your turns. Then, when he surfaces, beat him up. His offense isn’t all that strong.

Last pet, Brood of Mothallus, is a Beast with Burrow and Acidic Goo. That combo together can produce some devastating results. With the crab as long as I keep up heals and that shield I’m good to go, especially since Brood’s 3rd ability, the reflexive heal, is Undead damage. If I use an Anubisath, I use Stoneskin and Deflection to counter Burrow, and that’s all she wrote. With a Flying I use Lift Off when he Burrows and boom goes the dynamite. If I use a mechanical you know what I’m kind of running out of idioms to say I win, so let’s just say I win. 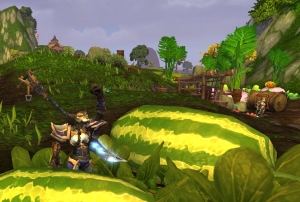 Now help me figure out how I’m going to steal this melon before Nishi sees me.