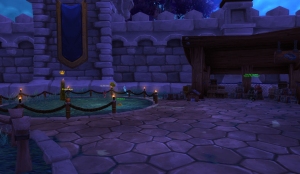 Carroteye, Mr. Terrible & Sloppus are a trio of extremely questionable foodstuffs apparently scrounged from the recesses of your Garrison’s larder by either a troll or a worgen. Either way, not a race exactly lauded for its excellent culinary prowess. Make sure you stock up on the Maalox before we start this one.

The Eternal Strider’s main role here is to provide big Aquatic offense. The Pump move is an excellent one to keep on hand here. The Strider is easy to obtain at high levels though, so even from a standing start that one shouldn’t be too much of a stretch, though there are other options here too. The second pet I used was a frog, and again, that one is easy to grab from a standing start. A big attack and a bit of longevity is key for the second pet. Snails can work pretty well here too. The third pet is my Emerald Proto-Whelp, which is a bit more difficult, but any dragonkin pet with the Onyxian Whelp moveset will work here too, among others. Strong dragon offense, a dodge and the additional heal finish off this strat.

The weird thing about Mr. Terrible is that he will be unable to kill your pet. Well, sort of. He uses Weakening Blow as his only active offensive move. 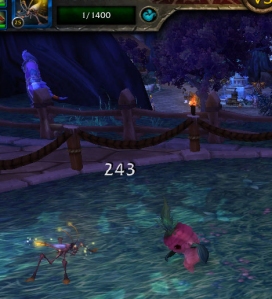 However, he also uses Spiked Skin. This means that you have to end things on your terms, which is why we can waste the day away charging up that final Pump for a finisher (though, full disclosure, I kinda screwed this up in the video, though I won anyway, so that’ll tell you what a great strat this is! eh? ehhhh?). Our pet will never be in danger of dying until we attack Mr. Terrible with that huge primed Pump.

Carroteye uses a moveset very similar to Carrotus Maximus, which is why the frog I favored there is making another appearance. Carroteye uses Ironbark just the same, so Swarm of Flies is out. However, since this is a group fight the predominant move I’m going to use here is Water Jet, not Frog Kiss, because if that starts hitting you’re in trouble. 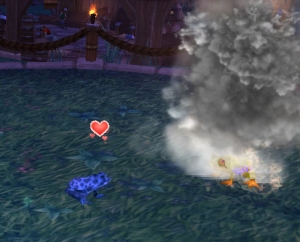 I also like the frog as the mid-point pet, because although all its offense gets destroyed when the final, Magic battle pet comes into play, it can still Frog Kiss a few times in order to hopefully give you a couple free hits.

Sloppus is the most infuriating part of this fight, because Stench means you start missing, and with the changes to Accuracy for 6.0, any time you miss it’s jarring and awful. It also makes the fight an RNG bonanza, which you know I totally enjoy as a strat writer. This, plus Chew, means that we need to have not only some longevity through heals, but also through some dodges. You likely won’t be able to use your avoidance move Chew every time, but with the heals that’s not really an issue.

No, the real issue is how I’m going to get my blood pressure down after this complete hogwash travesty of a missfest.

And now you know why I recommended the Maalox.