Alright, ALRIGHT. I confess! I was the one who helped some creepy old hermit in the backwoods of Duskwood, which is beyond clearly haunted, several years ago. I was a bright-eyed young recruit, and the subsequent betrayal cost me, cost all of Stormwind, dearly. It continues to cost me dearly, apparently.

Stitches Jr is another of the many battle pets running amok (amok! amok!) in your garrison’s Menagerie. He has a unique twist which you’ll find just scintillating, I’m sure. 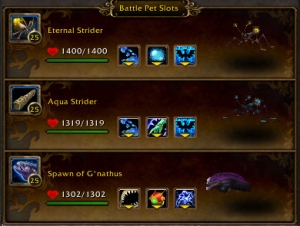 The team I used for the video was a little more exotic, using the Sea Pony instead of the Striders, so don’t panic if you’re here from the video. The Mud Jumper is another alternate pet which is a very common tame in new Nagrand, but again, mostly the same movesets as those old Striders.

The thing we’re looking for here is Aquatic battle pets, to blunt the amount of damage Stitches Jr does. We’re definitely well-served using Pump. Cleansing Rain is also extremely useful in more ways than one. For the anchor pet, Spawn of G’nathus’s Swallow You Whole is an execute-style spammable move. All the pets with that move are relatively rare though, so instead you could opt for something like Howl + Surge Of Power from Chrominius. Just something to completely destroy that opposing pet in short order.

So, why the emphasis on big damage? Iron Thread.

Every attack has to count, and count big. To be clear, this means that if you deal 499 damage you’ll get a (Blocked) message, but if you do 501 damage you’ll deal the whole 501 damage with no additional absorb.

Iron Thread is also why Cleansing Rain is so nice. The 25% increase to Aquatic attacks makes those big attacks just that much bigger. It’s also helpful, because it does a (relatively weak) AOE heal, and one of Stitches Jr’s offensive moves is Cleave, which splits the damage done among the pets still living.

With all Aquatic pets, Cleave is kind of laughable, which is why that cleansing rain heal is a good idea.

One last thing: watch out for that Undead res turn. This is the second reason I really like the Spawn of G’nathus as my anchor. I can just Dive to ride that out.