This adorable little tamer hails all the way from Sanctuary, and has a full team of Diablo-themed pets for you to reap some souls from. 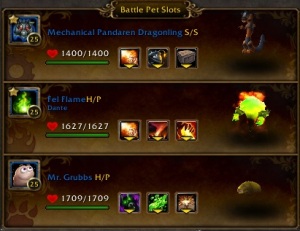 The Mechanical Pandaren Dragonling is the most obvious pick in the first slot, because Deebs is a Magic pet that deals Magic damage, and the Dragonling is a hard counter for both. I’d suggest a pet like the Emerald Proto-Whelp instead, with dragon abilities and lots of longevity instead, but it’s going to be an uphill climb. The Fel Flame provides a weather effect and a lot of burst DPS. Battle pets with Moonlight & Sunny Day should be down your list of effects to choose because the last 2 pets on the opposing team are Humanoid & their family heal will be buffed by this. Mr. Grubbs is on the team because of his reflexive heal and Burrow, which increases his longevity. Some other Undead pets will work, like the Restless Shadeling or the Fossilized Hatchling, but you need a pet with a lot of sustain to get the job done.

Deebs, the Lord of Terror begins the fight. He’ll use the offense-dampening move Weakness, which is another part of why the Dragonling is such a stellar choice. 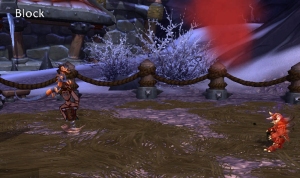 It can just Decoy to avoid that debuff & get in some really good offense. Deebs also uses a move which roots your pet in place, making teams with excessive swapping less viable.

The trickiest part of the fight is going up against Tyri. Tyri will use Darkness to Blind you & then use Surge Of Light to do big damage & stun.

This is why we need that short-cooldown weather effect from that Fel Flame’s Scorched Earth. Surge of Light gets a huge buff from that Darkness, so it’s imperative we change the weather ASAP. The other benefit is that the Fel Flame will burst down Tyri before Tyri can destroy your back row with his other move, Omnislash, an AoE. The absolute best choice would probably be Frosty, the Wrath Of The Lich King CE battle pet, but that’s not exactly a fair suggestion. Any pet with a lot of burst damage and a weather effect will do. An alternate tactic, which I lack the timing to be terribly successful with, would be to use a pet which benefits from Darkness but is sturdy enough to withstand that stun turn.

Puzzle the Treasure Goblin is less tricky than he is annoying, with a myriad of dodges, so you’re going to need a pet with a lot of self-healing & its own dodges to finish the fight. As an added issue, Puzzle will also cast Greedy, making your pet take additional damage, but also deal additional damage, which is why I really like the Grub pets with Consume, which scales with that additional damage dealt. 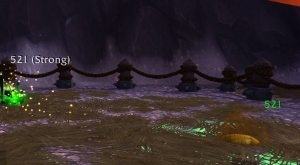 You know, provided you can hit the slippery little jerk. Use your Burrow on those Dodge turns & you & your grub should come out on top.