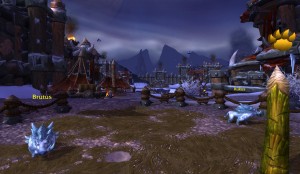 This team of 2 troublesome piggies has a few unique twists in the Menagerie ring, but as long as those piggies are Beasts, we’ve got the Mechanical cure.

The only battle pet on the team which is crucial for this strat is Lil Bling. Lil Bling has unique moves and is the heavy lifter, so the other pets can be fudged a bit. If you don’t have one, other than urging you to visit your local Auction House because Lil Bling is really good, I’d suggest a flying pet with Flock like the Ancona Chicken as a possible stand-in. The Yeti is easily replaced by another pet with Call Lightning. A Wild Golden Hatchling or Skywisp Moth is far more obtainable. The Yeti does provide an extra bit of insurance with Ion Cannon, which is why that’s my top pick, but it’s pretty much a security blanket. The Clockwork Gnome’s turret is quite unique, but a DoT, especially one placed on the front pet like Swarm Of Flies or even a weaker one like Death & Decay will work pretty well too.

Rukus & Brutus have a self-heal at the end of every round, so when we kill them, we want to make sure there’s no getting back up. We’re going to do that with a combo play.

We’ll send in the Clockwork Gnome to build a turret. Then the Yeti swaps in to cast Call Lightning. At this point Brutus has some really nasty tricks up his sleeve with Winter Spirit dealing lots of damage to both, because as Mechanicals they’re really vulnerable to it. He’ll also likely use Pig Out (a mechanic similar to Feed) after you use your Call Lightning, because hey, why not. Enter Lil Bling.

Lil Bling is the key to this fight, because he has an extremely strong Mechanical DoT in Make It Rain, but moreso because of the havoc Inflation wreaks. By itself it’s pretty strong against these beast battle pets. Paired with Call Lightning, the turret from the gnome and that Shattered Defenses (which multiplies all of the above) it will render these piggies into bacon in a handful of turns.

Rukus can make things a little tricky, by using Bloodfang to heal itself. Rukus will also use your own medicine against you by using Hunting Party, which has a similar mechanic to Inflation. This will kill Lil Bling pretty quickly for the same reasons. However, even though Lil Bling has passed on, his Shattered Defenses debuff will remain. One last Call Lightning should finish the job.

Just FYI, I don’t think Serr’ah or Lio would be too pleased if you actually made Brutus & Rukus into bacon, so maybe don’t. Or at least go over near the fishing hut or whatever.